Thanks to an absolutely delightful contribution from Jesse Laprade Lambdacreate now has a compliant RSS feed! If you're using RSS to follow the blog, you'll want to refresh your feed tracker. If you're looking for the feed it can be found here.

Thank you so much Jesse!

I absolutely adore low spec systems. Some of my all time favorite low spec systems have been mentioned on this blog already, but most of them are old mobile phones that were never meant to be full fledged computers. Just little consumer gizmos and tools. But I get well and truly excited about low spec netbooks, the kind of stuff you can grab off the shelf at Walmart for a couple hundred dollars.

And what do you get for your investment? A tiny Celeron dual core, a pinch of ram (maybe two if you really invest!), and just enough emmc memory to squeeze a Windows 10 installation onto. If you splurge you can get the same exact thing in ChromeOS flavor instead of Windows, maybe even with some additional emmc space! And for most non-technical people that's enough, it'll definitely handle email, and youtube, netflix and maybe a little bit of extremely light gaming.

So what does a technical person do with a consumer grade laptop? I don't spend a whole lot of time binging netflix, or surfing the web aimlessly. Most of the time I'm writing code, maybe playing a little bit of Minecraft if I'm lucky, or building infrastructure. And believe it or not, none of that really requires much at all, but then again I need SOME kind of specs, using an ancient 32bit processor is out of scope. Trust me, I've tried, I once tried to use a Viliv s5 as a remote support tool, had it running a fancy Debian build with Openbox and custom tooling, even had it "working", but it's not the same thing. I should probably dig it out of storage to do a little showcase on it at some point. 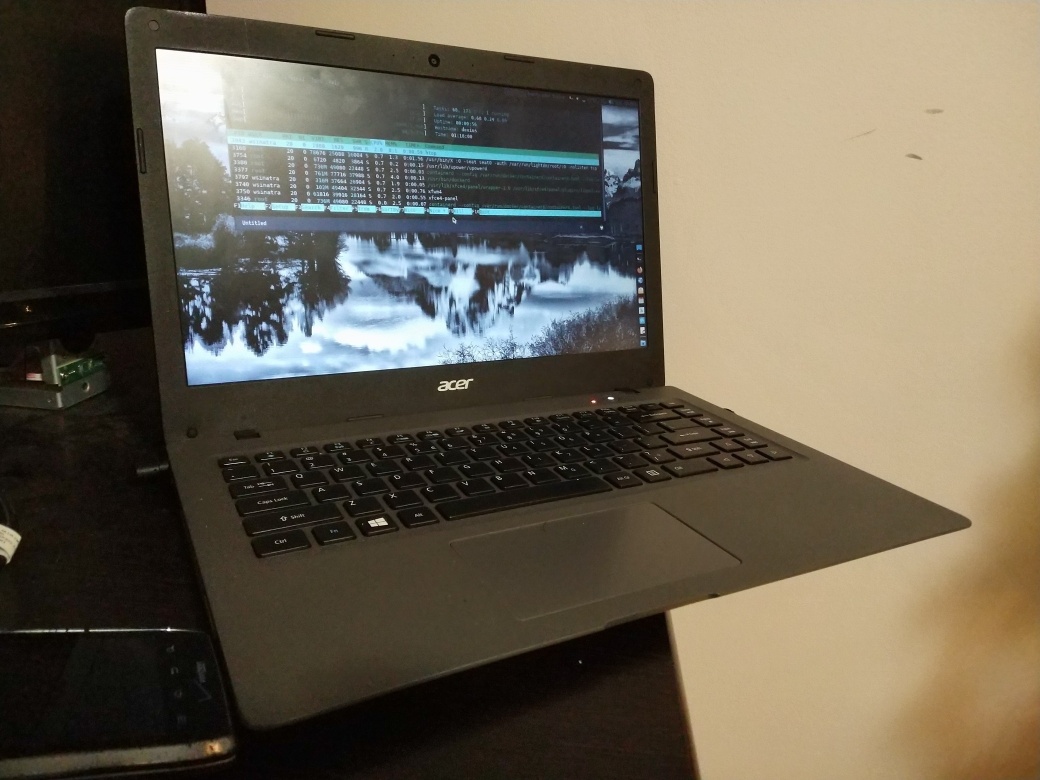 I've had an Acer Cloubook (an AO1-431-C8G8 specifically) for about 3 years, it was a complete impulse buy. I wanted a netbook to install arch Linux on, I was interviewing for a position as a System Analyst with TechKnow at the time, and just needed to feel like I knew what I was doing. I needed to tinker, but my Linux skills weren't as refined as they are today. I couldn't tweak my incredibly fragile home setup, besides it was an old Dell Optiplex tower that I got second hand, hardly the type of thing you can lug around with you. For my investment I got a Celeron N3050, 2GB of RAM, and 32GB of emmc, an absolute powerhouse of productivity!

I slapped Arch on it, threw together a half baked Herbstluftwm configuration, and started to tinker. It was great to run Firefox esr if I kept it to a tab or two. If I was feeling really crazy I could run runescape in it. A good bit of my first emacs lisp and more complicated bash scripting was banged out on the cheap plastic keyboard that warped whenever I typed. I loved it, but eventually it got put into storage. I got a T470s from TechKnow and it quickly came to replace both the desktop and netbook combined.

I dug it back out a year later when TechKnow closed and I started building the Chronos. Our initial prototype used a slightly stronger Celeron N3060 processor, and 2GB of RAM. That netbook felt like the perfect mobile dev machine to match the prototype Chronos. And I wrote incredible things on it, initially on arch with an absolutely micro sized Alpine KVM. It was SLOW, the 2GB of RAM was limiting. So I wiped it and put Alpine on it, and running XFCE4 I could get 300mb of RAM usage with a full desktop environment. And the battery lasted a literal 20 hours! (I'm not joking the battery is a massive 58wh cell). Lots of low level common lisp programming happened on a laptop you can grab on eBay for less than $100 today.

But alas, the aging N3050 and the minuscule 2GB of RAM no longer cuts it for what I need to do. When you're provisioning things with ansible and terraform, it just chugs along. If you need to stand up a series of docker containers, or multiple VMs for testing, there just isn't enough resources to work with these days. So I've had to replace my dear friend, and as melancholy as that is, I'm absolutely elated with the upgrade! I grabbed an Asus Vivobook L203MA second hand off eBay for a third the price of a new one, and am happily working away on a Celeron N4000, 4GB of RAM, and a 64GB emmc! And those numbers aren't just "doubled" in sized, they're literally double the performance! 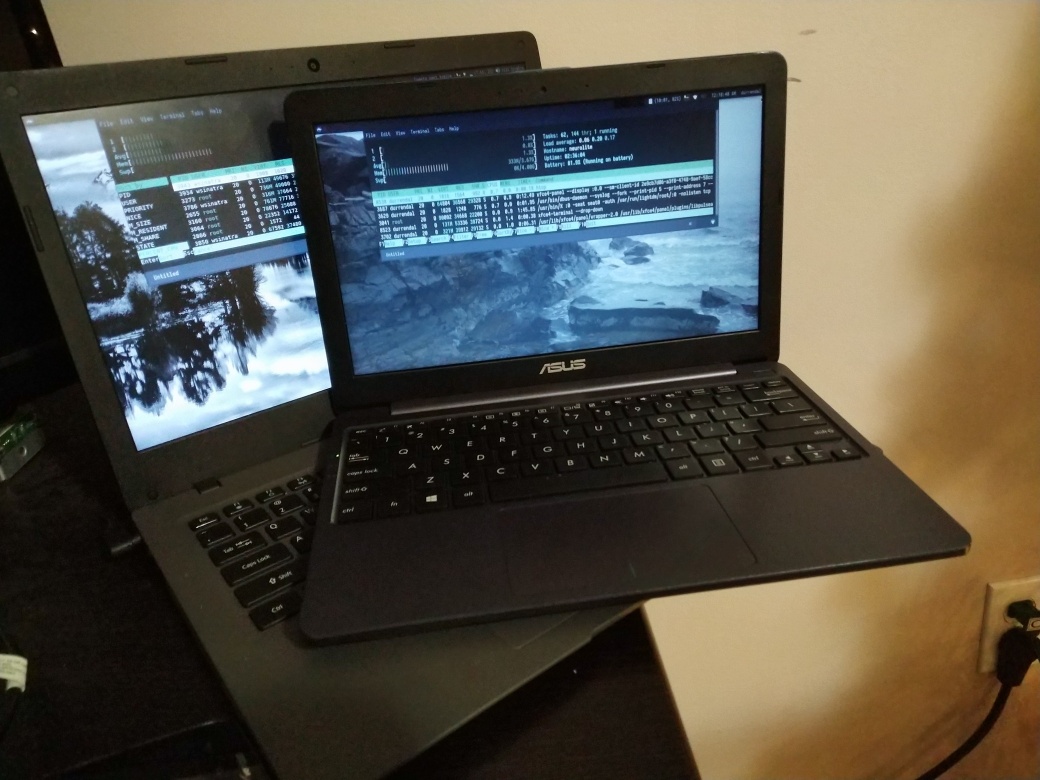 I've worked all week on this little 11in netbook, I've built a kiosk system in a tiny Alpine VM on libvirt. I've upgraded lambdacreate and added a segment for my tkts software in the docker container for the site. I've compiled software, build packages, and even provisioned systems via salt. I've literally not found a single thing this Vivobook can't do in my day to day personal/professional workflow. Hell, it even ran Minecraft! The poor Acer would hit resource exhaustion before the client could even launch.

It's all too common in the IT field to chase the newest, the latest, the greatest. Threadrippers and Gravitons are amazing, but you don't always need them for personal computing. You can easily justify the cost on a gaming rig where the processing power is necessary, and I wouldn't even try to consider doing AI/ML programming on this, or hell even attempt to run Crysis, but it's good enough to do most of the work I need to do while I'm on the go. And unlike a gaming rig, or a $1000+ laptop, it has a battery that will last all day and then some (14.5 hours on a single charge thus far!). And it has the benefit of being able to fit discreetly into my backpack without adding more than a couple of pounds of weight, and absolute necessity in my mind when I'm traveling.

That's it, all I wanted to do was gush about how much I love low spec consumer grade laptops. We've come a long way from the PDA days, we have real computers in our pockets. And we have real computers capable of doing real work, that don't cost an arm and a leg. We don't always need the top of the line specs to happily compute, sometimes we can be happy with the bare minimums. 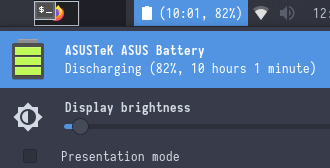